Knowing that cigars are healthy in general, I asked, back on March 25th: “Wouldn’t all those terrible carcinogenic chemicals in the fragrant cigar smoke kill the invisible enemy?” The answer appears to be “yes.”

The study suggests nicotine potentially blocks the virus from attaching to cells. Doctors had noticed a low number of smokers among patients being treated for the coronavirus, which was not statistically proportionate.

Anyway, last night, in honor of the ongoing insanity, I broke out a Diamond Crown MAXIMUS by JC Newman.

One of the best-looking bands in the business. Off of my Number 4 Toro.

And, in keeping with the advice of French researchers (and because I wanted to do so), I smoked it.

Outside, of course, so the wafting smoke could benefit as many potential hoax victims as possible.

Per my long-standing policy against a formal rating system, I’ll just say it was darn good!

Well, maybe I can do a little better. How’s this?

If you have to be locked under house arrest, might I advise enjoying an hour or two with this Dominican delight? Maximum hysteria calls for MAXIMUS response.

Is this a return of the regular cigar posting? Probably not. We, around here, just don’t hit ’em like we used to (which makes it so much better when we do).

From a cigar shop:

18 to die for the corporations, but 21 to enjoy a cigar. Typical gubmint-think.

The US Congress voted Thursday to raise the minimum age to buy tobacco and e-cigarettes from 18 to 21 across the country, a move intended to stem the rising tide of youth vaping.

Passed by the Senate as part of a wider budgetary bill, it will take effect next year and will mean that tobacco and e-cigarettes will join alcohol as substances that are prohibited to purchase for those under the age of 21.

Nineteen of the country’s 50 states and the capital Washington, DC had already set 21 as the minimum age.

“I’m proud the Senate approved legislation today including our Tobacco-Free Youth Act to help address this urgent crisis and keep these dangerous products away from our children,” said Senate Majority Leader Mitch McConnell, a Republican, who co-sponsored the bill along with Democratic Senator Tim Kaine.

Good, old-fashioned, bi-partisan bullshit. What are they smoking?

Not the best, but what it is, this week:

This one is a little short by my standards. My ultra-secret project is winding down and, honestly, I’m worn out. A new short work of fiction is materializing. As much time as it’s consumed, it’s still not quite ready.
Several ideas for this week presented themselves in due order. One kinda sorta made it, here, today. But, I needed a context. And, brothers and sisters, I found it, in a most unlikely manner, in a most likely place.
I have, for many years now, been a frequent fixture at various cigar shops, from Florida to New Hampshire. This afternoon, with a rare bit of “time off,” I decided to visit one of my former favorites. My purposes were two-fold: to have a smoke and to work on this column. Of the two, the smoking might be going more smoothly: 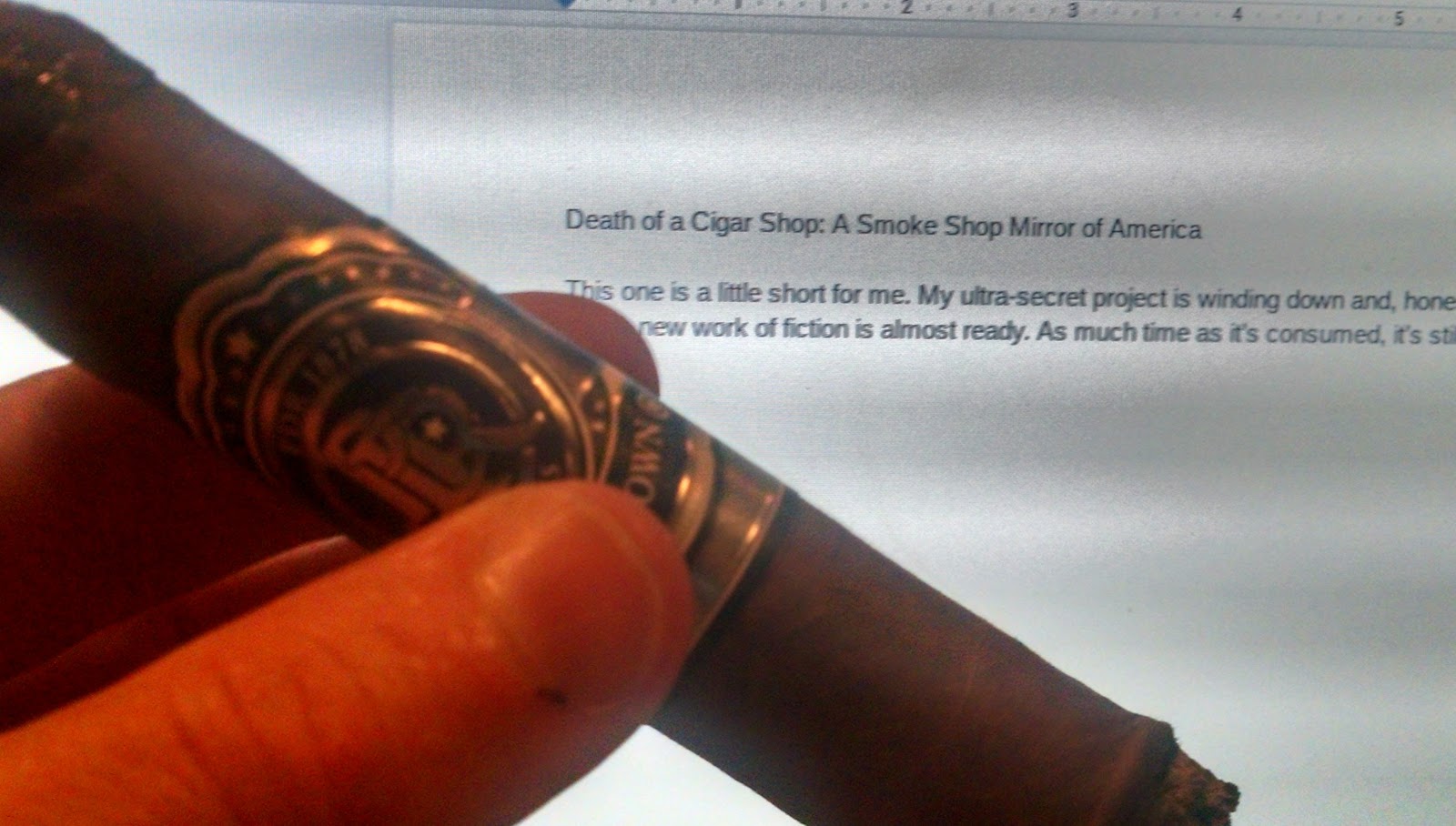 Casting the Widest Net, Real National Affairs for the People

Our topics of discussion, in this here column, of late, have been just a little heavy. For that, I do not apologize. Regardless of their ardent unpopularity among the general population, I kind of like freedom and truth. Matters of geopolitics, religion, economics, Satanic globalism, cultural decay, academic collapse, terrorism, war, and the very survival of Western Civilization are all worthy of intelligent consideration. And, if the approach is, or has to be, a little zealous, then so be it.

I recall Barry Goldwater’s eternal words of vitriolic courage, “…that extremism in the defense of liberty is no vice!”

But … not today. Today, in order to honor the real people out there (the “peeps,” as they call themselves) I cast forth the wide net, the drag net. Dredging the very bottom as it were. I owe my inspiration to a heart-warming family social media story I almost read last week. My drive I owe to a gaggle of teenage girls who, yesterday, forced me at gunpoint into a large, cool, hip, and very trendy Amerikan mall. It was, for them, a fantastic way to spend an afternoon, excused from schooling. For me, it was a fine, educational vacation day.

“Mauled at the mall,” I might normally call it. But, this time, I undertook a deep exploration of the culture on its home turf. Like a visitor from another planet, I stumbled about, awe-struck by the … um … the spectacle.

READ ALL AT TPC

Another great coronary corollary you won’t find anywhere else:

Greetings, beloved readers! Fire up a cigar and join Old Perrin once again for another jaunt into the affairs that shape and shake the nation. I invite the fumar cigarros out of devotion, taste, and concern for general well-being. It’s not a secret that your humble writer relishes the better leaves of Nica, the DR, and Cuber; many of these amalgams of dishonesty and fantasy are smoke-powered.
It’s hard to imagine in 2019 but there are some troglodytes around who still frown on Godly tobacco. Personal preferences are one thing. But to slander an entire species of plant is another. And, I’ve noticed one thing about many or most of the slanderers – they tend to be at least a little tubby and more than a little out of shape.
Nosir, Bub, my cigar will not harm me. Your super-jumbo slurpee, on the other hand, might just do you in. Obesity = Cancer. Health Europa reports that “According to new studies, excess body weight is an established cause of cancer, currently known to be linked to 13 cancers.” Mind you, that these were European scientists investigating American health. That’s understandable seeing as how we have a … larger problem here than they do across the pond.
The average American woman of 2018 is roughly the same weight as the average American man of 50 years ago. The average American man is now roughly the same weight (and shape) as a 1968 model Pacific Walrus (O. R. Divergens). I tried to get stats on today’s Walrus girth but it seems the last one was eaten by a couple of average modern Americans (We. R. Chubbies).
…

A bitter end for 2018, but an end 112 years in the making. America’s oldest man and cigar smoker has died.

Overton was born near Bastrop in 1906 and served in the army for three years during World War II. He spent the majority of his life in Austin and was often seen on the porch of his home, which he built in East Austin in 1945.

He gave credit to God for his longevity, but he always said cigars and whiskey helped.

He liked guns too.

I see the double fire selector, there.

***Note*** I’ve got a lot of drafts sitting around, some in existence and unpublished since 2013. It became obvious to me that I’m in no hurry to get around to them. But, they’ve survived various draft purges over the years. If they’re that important I can just come back and elaborate later. For now, I offer them, kind of as-is, in this, a lightning publishing round. The fun will continue while supplies last. Make of these what you will. Or not. I don’t care.

Aha! I found this, just a list of links to past news stories. The FDA communist assault continues, though some fight it. I’ve covered that. I even published a submitted CFR comment. Entertain yourselves, particularly if you’re in the industry, with the following (if operable – not checking):

How FDA Rules Are Making Life Hell For Cigar Lovers

The era of unregulated cigars may be going up in smoke

I’m a terrible social media user. You knew that. So it should come as no surprise that I hadn’t checked in at GAB in nearly a year (sorry #GabFam…). Anyway, I am glad I made a recent short incursion. I found out about a new cigar!

A Dark Triad cigar!, the progeny of our friend and best-selling author Ivan Throne.

Behold the Empalador (the Impaler)!

The names – of the smoke and of the man – say enough. I have not smoked one but I am assured of quality.

Look for her in Robusto, Churchill, and Torpedo sizing;

A real review from a real smoker, Dr. Jack Griffin, as lifted (with implied permission…) from the Empalador Site (get ye there and get on Ivan’s list):

“With a wrapper of aged Trojes Honduran, Honduran and Nicaraguan long filler, and an Indonesian binder, the Empalador (the “Impaler”) Robusto 5×50 is a delightful smoking experience.

“The scent of the foot promised a rich, complex smoke, and this fine stick did not disappoint. The aroma from the initial toasting offered notes of nut and pepper, and even an evasive hint of leather (at least to this reviewer’s nose). Smoking the cigar was deeply enjoyable paired with a fine bourbon. Although I usually allow a cigar to die a dignified death half way through the smoke, I found myself compelled to continue as there was none of the creeping bite and harshness one often finds as a cigar burns down.

“The Latin inscriptions on the band might be loosely translated as ‘the night owns the kingdom’ and ‘God wills’. Indeed it does and so does He. The Empalador is highly recommended.”

Nut, pepper, and evasive leather. Sounds outstanding! And, per my Nica-centricity, I’m going to say the magic Esteli or Jalapa (my guess) dirt adds just a hint of solid earthiness. Or so I hope. I find Dr. Griffin’s admission to burning his Robusto all the way down compelling. If it’s worth risking a burnt fingernail, it’s good. Period.

Going strictly by the pictured appearance, I’ll add that the Empalador is very well constructed. Such would be bolstered by Griffin’s account as harshness usually accompanies poor build, which does not favor an “undignified death.” A beautiful brown Maduro, it looks like a good cigar. My imagination and experience detect just enough strength and body to make the trip fun, yet not so strong as to overpower or moot any of the referenced notes.

In short: I’m looking forward to the real encounter. You should too.

In the wild, in the box. Bring it! Picture by the Dark Triad Man.

PS: In keeping with the name, consider (at least once) deploying John Daly’s golf tee punching method – impale the Impaler!