I’ve never seen anything like the globohomo assault on the truth over Russia’s defense of herself and civilization. Coming off two years of COVI-hoax madness, that says something.

Here are five books that help make sense of what the liars are up to, in general, and specifically, in this sad case in and around Ukraine. There are many more, but honestly, not many will even read one. I’ve also written and talked about these five previously.

More on these, perhaps in a column, later. Happy reading.

Again, everything the MSM reports is a lie.

Bullshit. Recall that they said the same thing about Chernobyl last week. The reporting on FAUX and CNN was just as hysterical and as untruthful as the headlines suggest.

RUS took control of the ZNPP on Monday and reported all normal to the IAEA.

IAEA accepted the report. IAEA, RUS, UA, and the US all recorded normal radiation and operations; they still do, all of them.

Ukranazis attacked the plant training building in an attempted false flag. They were repelled, trapped, and they set fire to the office building.

UA firefighters put out the fire. The reactors were never in danger and continue to operate normally.

As seen below, the closest reactor structure is a quarter-mile from the offices. 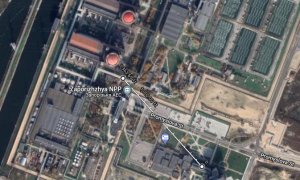 The “shelling” accusations are ridiculous. And the fact that RUS responses came from north to south – from inside the plant towards the UA saboteurs – indicates RUS control of the plant. Why would the “shell” a plant they already controlled?

If you believe anything the MSM, Zelenskyy, or Brandon say, then you are literally retarded. The good news is that these idiotic lies demonstrate the desperation of globohomo.

At NYU, a journalism propaganda class and professor are subject to propaganda for discussing propaganda.

On Sept. 20, after a class discussion of the case for universal masking as defense against transmission of SARS-COV-2 (in which discussion she did not participate), a student took to Twitter to express her fury that Prof. Miller had brought up the randomized, controlled tests—all of those so far conducted on the subject—finding that masks and ventilators are ineffective at preventing such transmission, because the COVID-19 virions are too small for such expedients to block them. Prof. Miller urged the students to read those studies, as well as others that purport to show the opposite, with due attention to the scientific reviews thereof, and possible financial links between the researchers conducting them, and such interests as Big Pharma and the Gates Foundation. Prof. Miller followed up by providing the links to the former studies (not easily found on Google, though they have all appeared in reputable medical journals), and other materials, including a video of a debate on the subject.

Of course, the school sided with the Twit-head. The truth has no place in Amerikan higher academia, certainly not in the journalism department. Associate with this idiocy at your own risk.

As the dedicated professionals of the public disinformation and communist programming cabal reel from one sniffle-based hoax, they grapple with how to deceptively implement another.

John Marshall keeps a picture of Breonna Taylor in his office at the headquarters of Kentucky’s largest school district, a visual reminder, he says, of the need for curriculum changes that better honor and focus on Black stories.

Good golly! It’s another “education” story that has it all:

You’ve probably identified the biggest issue with this crock of shit, right? Having succeeded so brilliantly in destroying the curriculum and turning off the young minds, these changes have nothing to take root in. What else, really, can they do that they’re not doing now? White guilt trip sessions? Daily beatings? Equity lynchings?

Who the hell cares? Not you. You homeschool! You’d damn well better.

See what I did there? Caps for us, not for them? The associated press, which may or may not be a CIA propaganda outlet, says their “style” calls for capitalizing “Black” but not “white.”

After changing its usage rules last month to capitalize the word “Black” when used in the context of race and culture, The Associated Press on Monday said it would not do the same for “white.”

The AP said white people in general have much less shared history and culture, and don’t have the experience of being discriminated against because of skin color.

That’s the real story: we have no history or culture. Just cancel us away, why don’t (((you)))? Of course, as usual, this BS comes from a man who, if he wears a hat, wears a very small hat.

“We agree that white people’s skin color plays into systemic inequalities and injustices, and we want our journalism to robustly explore these problems,” John Daniszewski, the AP’s vice president for standards, said in a memo to staff Monday. “But capitalizing the term white, as is done by white supremacists, risks subtly conveying legitimacy to such beliefs.”

In other words, the ap will help us experience discrimination against us based on our skin color. Every. Single. Time.

I never had much use for Antifa, seeing them as little more than street-level-dangerous, hit-n-run rabble. But now, with all the talk (blame) about them in relation to the unrest… There’s just been a little too much rhetoric of the worn, useless Civ-Nat variety from the FedGov and the media (FOX News). I’m beginning to wonder now that I’ve heard a few too many of the same old claims and that tiresome BS posturing. My old heuristic about never trusting the government and the MSM is kicking in. Soros, sure. Did the CIA also create or fund Antifa? Something else that just doesn’t add up.