The Masters is now tentatively scheduled for November 9 – 15.

So, we wait. Yes, this does coincide with the planned fall resurgence of the COVID Cold and the proposed reclosing of the “schools.” Interesting.

…is canceled until further notice.

My “smart” phone just reminded me that it’s Masters Week! And that I should already be on vacation at the writer’s cottage. HAHAHAHAHAHA!

Oh, this hoax is hurting worse than any flu!

This column addresses three topics of great importance, in reverse chronological order. The originally intended subject comes last, after two of perhaps greater relevance and general interest. This is good stuff (great, even); read on:
International Desk: Only the Building Burned. The Church is Adamant, the French Spirit Indomitable.
You’ve heard the news. The world knows. Paris’s landmark, 850-year-old Notre Dame Cathedral suffered extensive fire damage on Monday, April 15th.
I learned of the tragedy while, of all things, leading a discussion en Français with a group of talented young people. My first thought was, “that’s a maintenance accident!” Thus I thought because the inferno was emanating from the roof and attic. And, I’ve seen this exact scenario before in Athens, Georgia, of all places.
On a summer day in 1995, I traversed North Campus. Smoke I smelled and then saw. Brooks Hall, then home to the Terry College of Business (the same MB goes on about) was burning. Bad. They had been conducting roof renovations and some jackleg ignited the attic whilst welding. We lost two floors that day.
So it most likely was in Paris. Notre Dame’s roof is a thin cladding of lead over centuries-old timber framing. Dry, dry, dry wood possibly treated with pitch or tar(?). The lead requires soldering from time to time but they have to be extra careful given what lies beneath. On Monday something slipped. Bad. You know the deal – the central spire collapsed, the roof is gone, and complete destruction was narrowly averted by 500 doggedly determined firemen.
I am not yet ready to embrace any theory aside from this obvious scenario. Yes, I’ve seen some pictures. And, y’all know I have a keen sense of affairs and a vivid imagination. As is, I don’t (yet) buy the Islamic Jihad or false flag angles. I have, however, sensed a tremor in the force of Western Civilization.

READ MUCH MORE ONLY AT TPC

For several years, as part of my annual Masters Tournament coverage, I’ve dropped snide remarks about Darius Rucker ruining Rock Fore! Dough. In fairness to me, it really has become the Darius Rucker (and friends) Show. I recall, fondly, Cheap Trick’s dynamite delivery back in 2007. Remember waaaay back then?

But, I have to now admit that Rucker is a fine fit with the finest of festivities. Attention, RFD people: just add a little R-n-R variety if possible. Rucker and the Blowfish are pretty damned good. That I gathered from last night’s (non-RFD) concert, which also featured Sheryl Crow. It was a REM cover that convinced me. Not too bad. Rock on.

THE NATIONAL’S SITE (all things Masters)

I could get used to this new Masters thing. Sierra Brooks/Golfweek.

Okay, no one cares as this case involves excluding the evil bearers of male privilege:

We’ve all had those moments, whether you’re drowning in work in a cramped cubicle or just tired of the daily grind. In those moments, a thought might cross your mind, like “I wish I could escape to a private island.”

Well, entrepreneur Kristina Roth actually made that happen. She’s not just escaping to an island, she owns it. And she’s opening it up to women worldwide. But men? They’re not allowed.

“I’m a computer scientist, and I worked only with men. Ergo, how many times did I have to listen to ‘Hey blondie, what are you doing here?’ At least that was during my studies,” says Roth. “And I think judging a book by its cover — again that’s a cliché — that happens a lot in the tech world.”

Roth wanted to create something better. SuperShe society was born. It began as a networking group and expanded to include a lifestyle blog, events and women-only retreats in luxurious locations such as Hawaii, Necker Island and Turks & Caicos. It was meant to create a fun way for women to network — a way that men have been networking for years, Roth says, whether it’s at the golf course or the cigar club.

The golf course and the cigar club. Now what does that remind me of? Oh yeah, the harpies screamed until the National admitted women. Now the women, the kids, and who knows whom else want to ban the smokes on the course. But that’s okay. You’ve come a long way, baby.

Imagine if Blondie was a he and he started a computer company that forbade female employees. Ms. Burke?

Jeffery Epstein has an island for a type of men, mostly men. Excuse me, he HAD an island like that. Fire gets rid of evidence, no? Let’s assume this new venture is something different entirely. Some of you with the right plumbing might find out.

Deep apologies to Billy Gibbons and the boys…

CBS can fill you in on the tournament if you didn’t see it previously.

Here’s something you won’t be able to see until tomorrow:

I think this is a coming Crown Plaza:

Even the parking deck is nice:

Supposedly a beer garden somewhere in there: 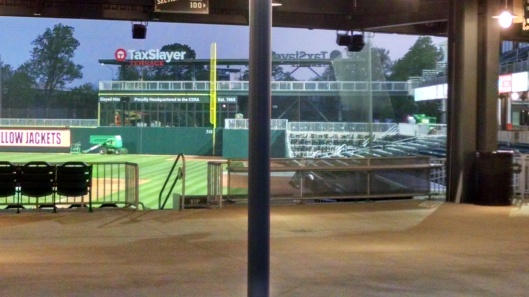 This “highly respected web log” isn’t just about loving guns and cigars nor hating on GubMint. The roving source for sporting news…

They used to have a bumper sticker in Augusta: “Pray for me. I drive on Washington Road.” Sure, several places in America have heavier traffic, but that strip between Calhoun (John C. not Algonquin J.) Expressway and … the lake? is bad enough. Now it’s not even safe to stand off to the side of it on a Friday morning. Everyone’s favorite neon golfer, John Daly, learned that the hard way.

AUGUSTA, Ga. – John Daly injured his right knee on Friday when a car travelling down Washington Road lost control and ran off the road, crashed through a line of temporary fencing and into his RV that was parked next to a restaurant.

Daly, who sells merchandise from his RV each year during the Masters, was standing in front of his RV with his fiancée, Anna Cladakis, when the accident occurred.

“It whaled into the front of the bus,” Cladakis told GolfChannel.com. “John dove out of the way, he tweaked his knee.”

I heard a rumor that the lady behind the offending wheel was DUI. Then again, one hears a lot of rumors in Augusta this week: kids’ golf, women’s golf, THE END OF CIGARS ON THE COURSE (yeah….), hi-rise hotels, property purchases, monorail, private airport, the true belief that screaming at a ball may direct its course towards a hole, someone knows a guy who knows a guy that saw something, etc.. Strange times in a strange town.

All know seeing this bus at Hooters each year is not strange:

I read a couple of stories about the incident from the popular press. First, maybe it’s the golfing and New York media that are “outlandish.” John is merely outrageous. For that, we love him. Him and his … eye-catching … merchandise. We even love his signing:

We just don’t want him hurt, thank you.

I’ve ranted before about how bad most America drivers really are. This week in a-town witnesses some of the worst of the worst. John’s wasn’t the only big bus “accident” of the week. This woman, if she was drunk, wasn’t the only one. In fact, if she was sober, she could have been the only one. I think a house cat might assume better control of a car. Confidence is not inspired. **Americans: either learn to drive or else await the robo cars (not long…).**

Happily, Daly, tweaked knee or not, is okay. I verified as much.

I see him from time to time, year to year. He figured into my Happy Little Cigar Book even. 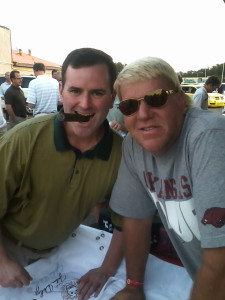 Daly and some cigar-crazed nut in happier times. Perrin.

As luck – or purposeful maneuvering – would have it, I caught up with Big John last night. He was limping but otherwise moving well and pretty quick. I asked how he was. He replied: “It hurts a little but we’re alright.”

Then, we’re all alright.

It’s that time again, Sports Fans. Wednesday in Augusta. Old Mr. Sunshine made his appearance a short time ago. Follow all the action, remotely, courtesy of the Tournament:

Throwback. That’s not a lady bug…

Best of luck to the field. Y’all have a grand time. And let’s not forget the other “Par Three” festivities at the tent, tonight.

Because you just can’t get enough ShineBox.