The U.S.-led coalition says American warplanes have dropped 36,000 kilograms (40 tons) of bombs on an Island in the Tigris River “infested” with members of the Islamic State group.

The coalition said F15 and F35 warplanes took part in the bombing on Qanus Island in the central province of Salaheddine, north of the capital Baghdad.

Tuesday’s attack is part of operations carried out by Iraqi forces and the U.S.-led coalition against IS, which was defeated in Iraq in 2017.

Maybe “defeated” has a cool new meaning, something borrowed from the Queer movement, about “operational fluidity” or some such bullshit. Iraq never had anything to do with 9/11, other than the pathetic aftermath. And, for the coming domestic unpleasantness, especially for all y’all AR-15ers with the cold, dead hands, 80,000 pounds of bombs is roughly the payload of a single B52. Parity? No.

9/11 features into the background of “The Substitute,” moving along at a swimming pace. You’ll see soon. And, more imminently – barring another scheduling conflict – I’ve got a 9/11 engineering bit coming to TPC.

Next week, I will publish a MAJOR national affairs article concerning the anniversary of 9/11 and WTC 7. I expect that interest in the matter, as opposed to football season, will be nonexistent. Stay tuned…

PS: The slightest rumors on an FP revival have surfaced. More on that if something materializes.

And the little lady (D-Somalia) gets more interesting each month. Her latest cause horreur:

Rep. Ilhan Omar (D-MN) trivialized the deadliest terrorist attack in U.S. history in a recent speech she gave at an event for the Council on American-Islamic Relations (CAIR) — which the United Arab Emirates has designated as a terrorist organization.

“CAIR was founded after 9/11 because they recognized that some people did something, and that all of us were starting to lose access to our civil liberties,” Omar said.

Omar was met by hundreds of protesters when she attended the March event in Los Angeles, who expressed strong disapproval of her use of anti-Semitic tropes and promotion of anti-Semitic conspiracy theories.

Omar responded to the “very interesting” pro-Israel demonstrators by saying: “I don’t think any of them realize that people like myself and many of the people in this room could care less about what they have to say.”

Well, there is some odd, maybe uncomfortable truth to her words. The one terror group’s activity did spawn another terror organization. And “all of us,” thank you W., did lose some access to some liberties. (How’s that commercial aviation treating y’all these days?)

Forget, for a second, straightforward questions about why we ever needed the presence of any groups like al-CIA-da’s flight school or CAIR Package, Inc. or anything else from the post-1965 era. Let’s continue.

Hart, Celler, and the Masshole Drunk Killer promised us “no changes.” Then the changes came, loud, proud, and massive. Now, we have so many (too many) identity groups competing for whatever remains. Their occasional interactions can be funny. Again, what works so well against the Woodstock Boomers, has no effect whatsoever on the newly arrived. They truly “could care less about” what’s said in re our greatest ally,” “6,000,000,” or any other rhetoric.

Okay, Posterity, back to the hard questions. I’ll start: “Is this whole thing a little too far gone at this point?” Your turn.

UPDATE (post scheduling, pre-publication): Soon after keying this one in, I had the fortune to meet another higher-IQ’d gent, a fellow author of Indian lineage. We struck up a conversation about Ilhen. This man was an exuberant civic nationalist, he (I gather) being his own very good example. We agreed to disagree on a few things but had a very good conversation. One thing we could agree on was that if one can’t leave, say Somalia, behind, then one should get the hell out.

The 9/11 Truthers have, in a sense, been vindicated, even 17 years late. Information is not presented to a grand jury without some basis of belief in veracity.

For years, hundreds of thousands of people have been calling upon the US government to investigate 9/11, and now progress is finally being made. On April 10th of this year, the non-profit Lawyers Committee for 9/11 Inquiry filed a petition with the U.S. Attorney in the Southern District of New York, Manhattan, requesting that he present to a grand jury the extensive evidence of federal crimes relating to the destruction of three World Trade Center high rises on 9/11. The petition cited conclusive evidence, providing proof of explosives and incendiaries employed at ground zero to bring down the twin towers as well as the WTC building #7.

The Lawyers’ Committee’s April 10th 52-page original Petition was accompanied by 57 exhibits and presented extensive evidence that explosives were used to destroy three WTC buildings. That evidence included independent scientific laboratory analysis of WTC dust samples showing the presence of high-tech explosives and/or incendiaries; numerous first-hand reports by First Responders of explosions at the WTC on 9/11; expert analysis of seismic evidence that explosions occurred at the WTC towers on 9/11 prior to the airplane impacts and prior to the building collapses; and expert analysis by architects, engineers, and scientists concluding that the rapid onset symmetrical near-free-fall acceleration collapse of three WTC high rise buildings on 9/11 exhibited the key characteristics of controlled demolition. The Lawyers’ Committee’s July 30th Amended Petition addresses several additional federal crimes beyond the federal bombing crime addressed in the original Petition. The Lawyers’ Committee concluded in the petitions that explosive and incendiary devices preplaced at the WTC were detonated causing the complete collapse of the WTC Twin Towers on 9/11 and increasing the tragic loss of life. (source) 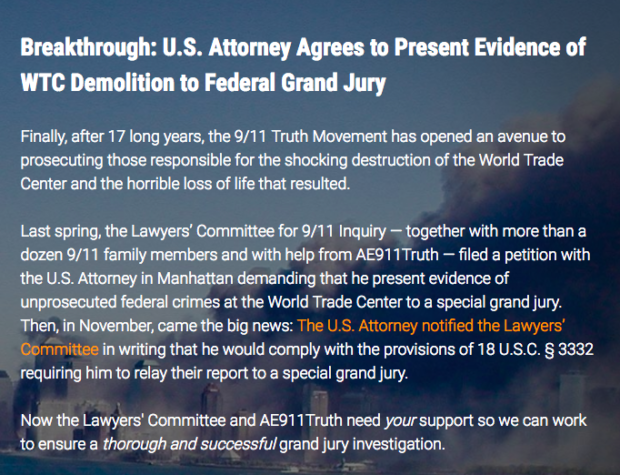 The attorney will have assistance from the Lawyers’ Committee with presenting the evidence to the special grand jury, and they requested that Architects and Engineers for 9/11 Truth provide support in making a joint presentation. They are also calling upon the public and legal community to contact them and support them in their efforts to contribute to this grand jury process.

Attorney William Jacoby, Lawyers’ Committee Board Member, stated: “We call upon the public and legal community to contact us and support our efforts to contribute to this grand jury process and to monitor and ensure compliance by the Justice Department.”

Executive Director and Actor Ed Asner stated: “The U.S. Attorney’s decision to comply with the Special Grand Jury Statute regarding our petitions is an important step towards greater transparency and accountability regarding the tragic events of 9/11.”

The horror and disbelief of the day certainly come to mind.

The rest? What, exactly, do we know these years later?

Foreign agents arrested and then spirited away as fast (and as quietly) as possible.

Anomalies ignored and dismissed. No explanation of seismographic readings, titanium diboride residue, extreme temperature readings, disappeared physical evidence, or of how a small office fire, isolated and self-extinguished, managed to collapse a 47-story steel-framed tower (a first and only known occurrence). And more.

A narrative from Mordor, unchallenged, and endlessly echoed by the enemies of the people.

A ceremonial investigation obstructed at every turn.

Ceremonial investigators, tiring of the obstruction, resigned, calling the farce a farce.

Underlying issues and possible causality unaddressed, made worse in fact.

A State deeper than ever.

It’s likely that as many will wake up have already done so. Our one possible known hope is that a certain President successfully uses the excesses of the power elite against them. A thin hope at best, but still something to cheer.

Before we vow to never forget, it might help to at least first know what we’re not forgetting.

WTC 7 even gets the memorial spotlight shaft.