While everyone was watching the maneuvers and exercises of the PLA Navy, Beijing delivered an imperceptible, but perfectly calibrated and crushing blow. Since August 3, it has been strictly forbidden to send sand to Taiwan. For Taiwan, this is far worse than a direct military invasion and an amphibious landing.

The disruption of imported supply chains of construction sand and quartz sand could potentially send not only the Taiwanese economy, but the entire global electronics industry, from game consoles to the “brains” of modern missiles and fighter jets, into a deep knockout.

If you’re looking for a new electronic gizmo, today might be a good time to buy it.

In the past year or so, in writing and/or on the PPN, I think I was a little too general or too hasty in dismissing the translation notes from Langley’s edition of UNRESTRICTED WARFARE (1999). The notes’ derisiveness speaks for itself in comparison to the main body of the subject matter. However, the blame probably does not lie with the translators.

After all, as to the line interpreters, any presumable Westerner smart enough to translate Chinese is probably at least moderately familiar with simple algebra. A mid to high-level org flow chart technocrat might not be; one certainly wouldn’t be that interested in it – especially one ordered to “see no evil.”

While I should have suspected as much, I did not realize until recently the extreme pressure and bullying that went downwards through the Company in order to minimize any objective risk assessment concerning China – during the optimistic phases of the now failed Eastward Leap. (One wonders about the political acrobatics happening now as the dark state belatedly comes about). The Dilbert principle at work in a wicked agency.

If you haven’t read the book and do not know what I’m talking about here, then perhaps you’re up for a promotion!

You are Gal Gadot. No, you’ll never be that attractive. But you are the target of a coordinated disinformation attack.

This is a social media campaign to make those who are not vaccinated feel as if they are alone. It’s cloaked in feigned concern for the family members, but it’s a fake comment designed to put social pressure on the unmutated nevertheless. And it’s not the only such campaign. 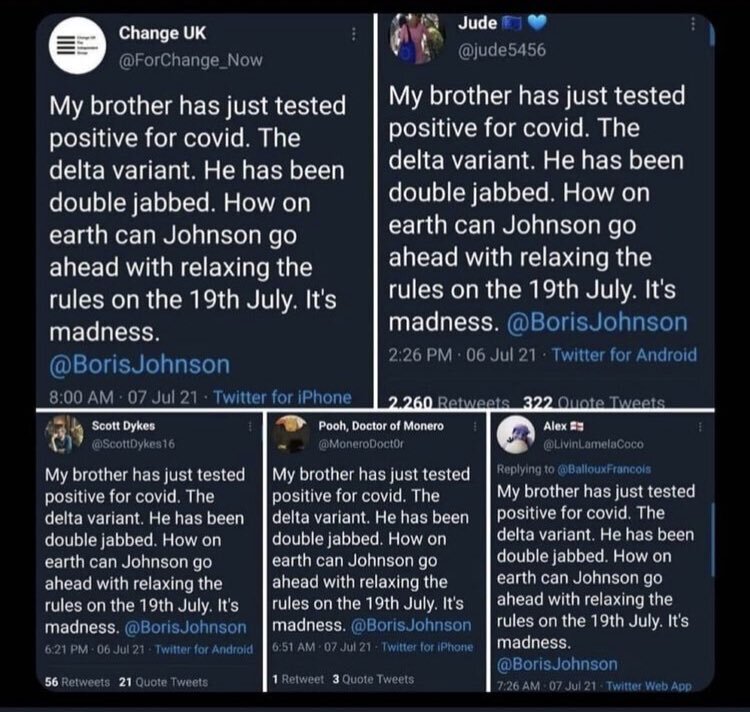 Imagine a hoax so convincing, they have to deploy the social bots to push it.

That Unrestricted Warfare thing is real, read the book or not. Last week, without having to look too deeply into the matter, I spotted the patterns deployed against (or through) the incredible Gal Gadot [now the official favorite celebrity of this Highly Respected Web Log (where’s my “heart” emoji, WP????)].

Many Gadot-bashers are, I deduce, robots and paid shills. There’s just too much homogeneity and synchronization across many of the comments on multiple platforms. That made me realize something; this isn’t really about Gaza and it’s certainly not about Gal Gadot. It has the signature of the Unrestricted Warfare described by PLA Cols. Liang and Xiangsui in 1999. There are multiple fifth-generation conflicts being waged around the world by multiple parties for multiple reasons. Some of them concern Israel, the Arab-Muslim Middle East, and the United States. Who and why? I have no definitive idea. However, a popular movie star provides an attractive vehicle for spreading the overwhelming chatter. Strange things do happen – more frequently than one imagines.

Now, belatedly, and without a word of praise for our Wonder Gal, the Times, with help from “experts” and the Twitz, reluctantly admits the same (in general and as concerning Israel).

But while support for Palestinians on streets worldwide may have been real, Israeli researchers attempting to pierce the fog of war surrounding the conflict have raised doubts regarding how much of the supposed social media war was truly authentic. Experts say that we often don’t know why we’re exposed to a particular piece of content online, whether as a byproduct of an algorithm seeking to shock and outrage us or by bad actors hoping to do the same.

“The social media networks made it very easy for anyone to tweak the system,” said Elad Ratson, a former Israeli diplomat who now runs Vayehee, a Paris-based company that uses technology to counter misinformation online.

More frequently than one imagines. Another reason to come here first.

With a very short review of Unrestricted Warfare.

They’re setting it up, day by day and tall tale by tall tale.

The strange encounter, which happened in a remote region west of Des Moines, involved AA Flight 2292, an Airbus A302, The Drive reports.

The plane was apparently travelling at 406 miles per hour at the time.

New Mexico is home to White Sands Missile Range, which is located in the southern part of the state and is described as the Department of Defense’s “largest, fully-instrumented, open air range.”

Scott Stearns of White Sands Missile Range, said no tests took place on Sunday – and pointed out there is a distance or around 400 miles between the missile range and northeastern New Mexico.

He told Fox: “We have no idea what it could have been or if anything similar has been sighted in that area before.”

It comes after a string of strange incidents involving UFO-like objects flying close to passenger jets.

This is another giant hoax. This is fifth-generation warfare psyops. The day will come when Kamala or some other idiot liar comes on the magic talking box and tells you Mars is attacking. Something will be said about surrendering your guns, your children, and your worthless digital currency. If I can communicate from my remote location, I’ll say, “TOLD YA!”