Ukrainian Vodka With A Side Of Freedom Fries

Under the knife this coming Friday! I’ve decided to undergo a lobotomy. By maybe cutting my IQ in half, I can become a happy, successful, ordinary, post-modern Amerikan retard.

The people who occupy space in the strange nation-shaped kind of area where I live might qualify as the dumbest bunch of human beings in history. Well, maybe it’s not quite that bad. Close though. And, as stupid and gullible as they are, them thar ‘Muricans got some serious competition in the world’s most idiotic people competition.

The world just endured two straight years of the most horrifically obvious hoax ever conceived by man or demon. Add that tidbit to the fact that the glowing, talking screen on the wall has never once told anyone the truth, and … the people dutifully sit, stare, droll, and absorb one lie after another. The current lies are programmed to get the people worked up too. They’ve done that before, but not this degree or this quickly. Today, with the exceptions of most Russians, the Chinese, Iranians, Mexican politicians and tour guides, and many Ukrainians, the people #StandWithUkraine! That goes double for the 89% who still can’t find the place on a map despite the fact one has been constantly all over the screens for the past week.

I get it, I sure do: many of the people are good and decent and only mean well, which makes them easy targets for liars. Again. And Again. And, incidentally, this is what they’re supporting:

Drape yourselves in that, EU Parliamentarian, local college SJW, and Sally Soccer Mom!

Cuck Rodeo Ranger Greg Abbott is leading a crusade against our greatest enemy – Russian vodka. Ukrainian vodka is good enough, but it’s all booze, right? Even the types who usually need a 750 of Nemiroff to wash down the Xanax and Percs, are pouring the stuff down the drain. (They’ll regret that later tonight, methinks). Does this not remind the reader of the “freedom fries” foolishness, circa 2003? Maybe it’s a subliminal potato thing? Maybe the screens? Dunno.

I do know that fools worldwide are lining up, beating their chests, and preparing to ship off, no-visa-needed, to die quick deaths in the Donbas cauldron. I saw footage of these people, I think in the UK. The men of a nation overrun and invaded are off to save another nation from being liberated and to side with the same sorts their grandpas fought eighty years ago. The world makes little sense. But, it is funny. Many of the fresh targets are still sporting face diapers! That will show them dumb Ruskies! BTW, for fun, or if you’re seriously considering joining the fish-in-a-barrel legion, just GOOOOOOOOOOgull “MLRS.” The Russians are fond of these and they may, in fact, be slightly more dangerous than the common cold. You’re business, either way.

The rest will keep watching FOX News, dream of being Rambo, and sucking up all the Promethean propaganda they can find. That each and every lie is immediately disproven – sometimes they’re self-disproving – means little to nothing to the brainwashed, drug-addled, obese amoeba intently watching the screens. If that’s not you, then may I offer some alternative, conspiracy theory, blue-check-debunked, crazy, hoax facts? Bullet point facts, too.

That’s enough for now as we still, none of us, know very much. Let the very concerned concern trolls and deluded teevee enthusiasts pour out all the spirits they like. Take a measure of heart and hope! The sides are less than clear and less than perfect. However, this looks to be the first large outing of the Anti-globalist Alliance. In a sense, it is Christians (and allies) against satanists (and dupes). May that the good guys win. Deo Vindici!

Russia has suffered 498 KIA, on the low average side of the 200 – 1100 estimate in the CEV noted above. The MSM is lying by at least a factor of 10. More good news: UA casualties are also lower than estimated.

The cauldron in Donbas is closed or closeable (corridor for civilians [not held captive by Nazis] and surrendered UA soldiers to leave; MLRS/air controlled gap, if any). Looking at the last updated map, I counted 3 such envelopments to include a theater-wide lock currently being established on a line from Kiev to Odessa. This line looks like it could easily slip west to the Carpathians, and/or it will serve as a shield against Boomer Rambos coming in from Poland or points west (the ones not incinerated by airstrikes).

A very important discussion of why the special military action was imperative.

EXTREMELY DISTURBING! HERE is the War Crimes Report concerning UA atrocities in Donbas from 2014-present. It is a PR-dressed report but is also brutally graphic. Viewer discretion!

The VIDEO version of the report (in a PDF). Again, EXTREMELY DISTURBING. These reports show what massacred people look like; if even slightly bothered by such things, consider not watching/reading.

Look for something like Nuremberg when this is over. If the ICC/UN won’t act, Russia will. And there are credible reports that the very few RUS servicemen captured are being executed with torture. With the old and (potential) new war crimes against DPR and LRP civilians, RUS civilians, and especially against RUS troops, the exact criminals are already being identified and targeted. I do not see many of them living to stand trial.

UPDATE (3/2/22 5 PM): For reference, Ukraine is roughly the size of Texas. A just-released map of the massive RUS failure, retreat, and surrender… Or, it illustrates some of my earlier points. 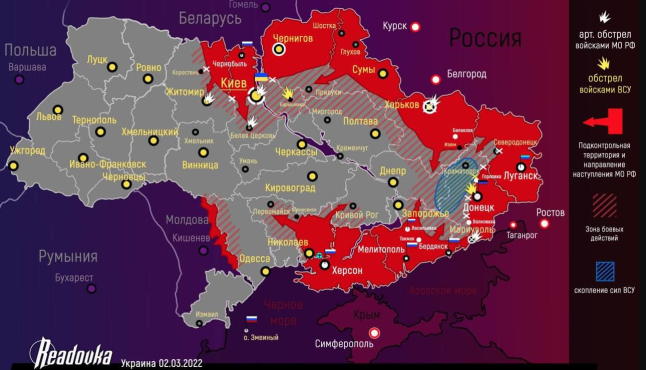 The red is RUS zones, totaling an area the size of GB. The blue pocket in the east represents the entrapment of 65-80% of the whole UA land army (the AF and Navy are reportedly 100% destroyed). The western flank is new (to me). An area equivalent to the size of France will be under total control in a day or so.