Forget the dreadful story about the idiot UK “conservatives” wanting more foreign welfare dependents and criminals in a time of economic collapse and social chaos. This screenshot from RT, just a picture, says it all: 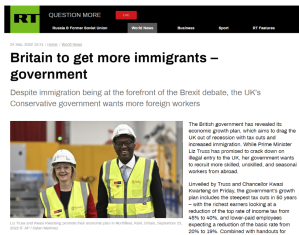 As I keep pointing out, the UK is about where the US was 40 years ago in demographic terms (its worse in terms of debt and democracy). Now, today, is the time for emergency action. Will a real King please stand up?

I felt bad for the man when Liz Truss came out from under her residential bridge and sanctioned him like a common, passing Billy Goat. But, honestly, he appears to be ahead of most of us in terms of aesthetic beauty and happiness. Here he is again with “action” at the Donbass polls…

Rub it in, buddy. Okay, I’m just a little jealous. And yes, there are only two kinds of women in the Don – nines and tens. Geesh…

Rock on, good people, rock on!

We are saved at last, Americans! The brave and very valiant Republicants have given us the Commitment To America! And the people, half of them, are set and ready to fall for this pathetic BS rehashed nonsense – which isn’t even worth reading about.

Meanwhile, the one “Republican” who sometimes (sometimes…) tells the truth, the bloviating con man of Orange, gave Sludge and the Deadly Snail their one correct BS headline of the year.

Donald Trump says ‘stupid’ Biden administration could trigger World War Three with Putin over Ukraine, and predicts US would LOSE conflict to Russia

Because that is what would (or will) happen. Not that most people are aware or capable of understanding. Not that that matters anymore. Vote on, retards.

Very irregular now, and probably not long for the web…

The people will seemingly fall for anything. When Russia pointed out that Nazi Ukraine is run by Nazis, the morons responded with a blind, base “no, there are no Nazis. Ze is a Jew!” When a German news crew interviews a Ukranazi and a Ukranazi tank rolls by sporting a swastika, no one bats a blind eye.

So it is that Dr. Roberts correctly calls out the future of “democracy” in the former land of the free.

The Democrats and FBI would not be doing this unless they expected to succeed. The initial response of insouciant Americans is to believe the government. Then years later when they discover they were deceived, it is too late to do anything about it, and they fall for the next deception. Freedom is lost because of the stupidity and gullibility of the people.

The Democrat Party, FBI, and US Department of Justice (sic) have committed so many felonies that a Republican election victory, despite RINO Republicans such as the useless Minority Leader in the Senate, would result in a demand for investigations and accountability. The Democrats, their whore media, the FBI, and the Department of Justice (sic) are not going to allow a free election.

Don’t expect one. You are not going to get one.

A great but terrible blast from the educational past: the late John Taylor Gatto’s acceptance speech, as teacher of the year, from 1990:

We live in a time of great school crisis. Our children rank at the bottom of nineteen industrial nations in reading, writing and arithmetic. At the very bottom. The world’s narcotic economy is based upon our own consumption of the commodity, if we didn’t buy so many powdered dreams the business would collapse – and schools are an important sales outlet. Our teenage suicide rate is the highest in the world and suicidal kids are rich kids for the most part, not the poor. In Manhattan fifty per cent of all new marriages last less than five years. So something is wrong for sure.

Our school crisis is a reflection of this greater social crisis. We seem to have lost our identity. Children and old people are penned up and locked away from the business of the world to a degree without precedent – nobody talks to them anymore and without children and old people mixing in daily life a community has no future and no past, only a continuous present. In fact, the name “community” hardly applies to the way we interact with each other. We live in networks, not communities, and everyone I know is lonely because of that. In some strange way school is a major actor in this tragedy just as it is a major actor in the widening guilt among social classes. Using school as a sorting mechanism we appear to be on the way to creating a caste system, complete with untouchables who wander through subway trains begging and sleep on the streets.

I’ve noticed a fascinating phenomenon in my twenty-five years of teaching – that schools and schooling are increasingly irrelevant to the great enterprises of the planet. No one believes anymore that scientists are trained in science classes or politicians in civics classes or poets in English classes. The truth is that schools don’t really teach anything except how to obey orders. This is a great mystery to me because thousands of humane, caring people work in schools as teachers and aides and administrators but the abstract logic of the institution overwhelms their individual contributions. Although teachers do care and do work very hard, the institution is psychopathic – it has no conscience. It rings a bell and the young man in the middle of writing a poem must close his notebook and move to different cell where he must memorize that man and monkeys derive from a common ancestor.

Our form of compulsory schooling is an invention of the state of Massachusetts around 1850. It was resisted – sometimes with guns – by an estimated eighty per cent of the Massachusetts population, the last outpost in Barnstable on Cape Cod not surrendering its children until the 1880’s when the area was seized by militia and children marched to school under guard.

Now here is a curious idea to ponder. Senator Ted Kennedy’s office released a paper not too long ago claiming that prior to compulsory education the state literacy rate was 98% and after it the figure never again reached above 91% where it stands in 1990. I hope that interests you.

It probably does not interest the average American. Not then, certainly not now. But it should – read the whole thing. Find and read some of Gatto’s books. Schools didn’t fail this year. Nor in 1990. they were designed and built, from the very start, as failure incarnate. In a sense, they have succeeded impressively. For that, they should be completely destroyed.

Note that, in 1990, homeschool children “seem to be five or even ten years ahead of their formally trained peers in their ability to think.” That difference, then, was mainly a comparison to the government schools, though it applied also to privates. Now, I suspect it directly applies to most all private schools with the publics not even registering. Does that interest anyone? The homeschoolers perhaps.

That is the only sane and workable solution – teach children by allowing them to learn. That cannot be accomplished in the formal pedo-victim factories where most people stupidly send their kids. Stop abusing children and stop destroying civilization.

It’s about time for some cooler weather!

America, what’s left of it, is ceasing to be Christian. The formerly 95% Christian nation slides into paganism.

America’s Christian majority could end by 2070

“Since the 1990s, large numbers of Americans have left Christianity to join the growing ranks of U.S. adults who describe their religious identity as atheist, agnostic or ‘nothing in particular,'” Pew writes.

Literal, Christ-following Christians may already be a minority, and I would expect the total number to drop below 50% earlier than 2070 – much earlier.

The fastest growing “religion” is paganism, witchcraft, and/or satanism. So it is that wicked American turn a blind, stupid eye to things like this. And to being called out in their luciferian hypocrisy like this.

The US cannot be saved and it does not deserve saving. Rather, good Americans must separate themselves from the dead society and forge a new future.

(Paperwork) US citizen and Palestinian CHRISTIAN reporter Shireen Abu Akleh was most likely deliberately assassinated by the US’s bestest ally ever.

A joint investigation by a London-based multidisciplinary research group and a Palestinian rights group has uncovered further evidence that refutes Israel’s account that the killing of veteran Al Jazeera journalist Shireen Abu Akleh was a mistake.

No word, yet, from the fake-Christian, evangelical zio rabble. But as the facts become stronger, the calls of “conspiracy theory” from the homo conservatards will grow louder.

Early this morning, Russia kicked the SMO into high gear.

The goal of that part of the West is to weaken, divide and ultimately destroy our country. They are saying openly now that in 1991 they managed to split up the Soviet Union and now is the time to do the same to Russia, which must be divided into numerous regions that would be at deadly feud with each other.

They devised these plans long ago.

They know exactly who they are at war with.

Many thanks to Andrei, The Saker, for translations, links, and commentary.

The Lugansk Republic, Donetsk Republic, and the oppressed Zaporozhie and Kherson regions of Ukraine will vote by large majorities to join the Russian Federation. Putin knows this. As noted, the LPR and DPR are practically pacified and Nazi-free. Emphasis is shifting to the south (Zap. and Kherson). The extra 300 K reserves will likely serve as peacekeepers, MPs, and border guards for the realigned Russian territories. Note also that, among the innumerable lies the fake news told recently, Shoigu is still working and in-charge.

The babblings of fake SecState and fake American Blinken aside, real democracy and real freedom will unfold in the Donbass. Literally nobody cares what the US thinks, says, or does anymore.

The new phase of the SMO will likely see heavier concentration towards Odessa and probably Kharkiv as well (so much for the great gains of the “counter-offensive”). They too will join Russia. Then, the rest of central Ukraine will be pacified and the western parts likely rearranged. No one outside the MOD knows exactly how. But the gloves are, to a degree, coming off.

There is nothing the USSA, NATO, or anyone else can do to stop or slow this progress. It’s just a matter of how evil and stupid they are and what they’re willing to lose in the process. Note also the mentions of the US/NATO satellites. If US ISR directs fire into the new or existing RUS territory, that will be taken as an act of war. Which will be responded to accordingly. Russia can easily destroy the satellites. And things may heat up considerably. If it comes to full-scale war, Russia will not be nearly as gentle with the WereWest as it has been with and in the Donbass or in Ukraine in general. While still hoping for a smooth or soft-landing, know this could all get very rough, very fast.

This fall and winter will be a wake-up call and/or massacre for Europe. The US will continue to fade and fall. The sovereign nations are rising and the NWO is dying. The future is now.