Thank you, to those who found last week’s column on the special military operation in Ukraine insightful. Today, I want to briefly touch on a growing theory of mine; I’ll get to it in a jiffy. There is so much going on that it is most difficult to understand it let alone accurately comment on it. Please take a few minutes and read Michael Hudson’s review of what the whole show means for the satanic world disorder. 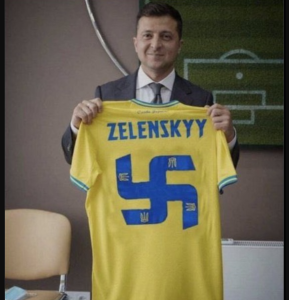 (“Somebody ousted my fake administration and all I got was this lousy soccer jersey…”)(Is he in Warsaw? Or the hills? Who knows? #StandWithJewishHitler!)

I’ll just add some summary remarks, about the situation on the ground in Ukraine, in the form of a horribly bastardized song:

And then they grabbed Ukraine (and then)

They tied Donbas up (and then)

They prepared to invade (and then, and then!)

And then along came Putin

Okay, now – very briefly – my theory. You know the old quote: “From Stettin in the Baltic to Trieste in the Adriatic, an iron curtain has descended across the Continent.” Churchill, 1946. The only man who has made an intelligent modern adaptation of the line is Sergey Lavrov. He knows exactly what has happened. The fools in the media, in London, and in Washington have no idea. Still, they’re all parroting some nonsense about Russia resealing itself behind a Fe partition. That’s not it at all, or so I think.

It’s not Russia slapping pitiful sanctions on the West willy-nilly. It’s not Russia pulling trade, ships, planes, and fast food joints out of the West. It’s not Russia running a massive disinformation campaign against the West. Russia has not banned Western cats. It’s the opposite; it is already backfiring.

Words, especially of the kind our fake elite love to wield like weapons, do not win wars. What they can do, ordinarily, is frighten conservatives into silence. Against Russia? As someone put it, they’re throwing poor Br’er Putin right into Xi’s briar patch. Long was this counter system in the making. And, the NWO still can’t understand what’s happening – again, read Hudson’s article.

I know they have plans and plans behind the plans. But at some point, I stop giving them credit. Their terrified reactions give away that this Russian stone wall was not a part of the plan! Yes, they’re very good at improvising and trying to make the most of a new, unforeseen calamity. If they know they’re having it handed to them, they will at least try to sow as much chaos as possible. They’re doing it, times ten, right now.

It has been suggested that our old friends at Langley are the ones coordinating the Rambo deployments. They are evidently building a new al-CIA-da or I-CIA-SIS. They allegedly have some 10-20,000 of these new jihadis on the ground and staging in Poland. This time around, the stooges are ultra ”right-wing” neo-Nazis, not Muslims. The Russians can and will kill those stormtroopers (real or fake) just as fast as they’re cutting down the Azov SS. That’s not the point.

We live in a nation-shaped hoax, awash in hoaxes, ruled by hoaxes. Before the PUTIN IS HITLER! Madness, there was another PUTIN IS HITLER! madness, COVAIDS, climate mania, a stolen election, J6, and, some few of you might recall, Operation Nine-Eleven Woods (and never-ending foreign and domestic fallout). And, these past two or so years, who have we been reliably informed is the gravest threat to the peace, security, and freedom of the old ole USSA? That’s right. Us. They call us all sorts of lovely false names: domestic extremists, domestic terrorists, White Supremacists, right-wing militias, and, yes, neo-Nazis. Can anyone else just maybe see the coming of some more contrived blowback and ensuing crackdowns on the homefront? I can.

Our enemies are effectively trapped here with us. Russia kicked them out. China won’t have them. Much of Europe is becoming unsafe for them. India, Israel, and a host of other places simply do not want them. They’re losing and they are mighty angry about it. As there is little to nothing they can do to strong foreign foes, aside from the usual word games, they are starting to turn the wrath inwards. Against us.

They don’t care if you can’t buy gas. Or heat your house. Or have a house. Or a job, Or if you get nuked. They’re out for us. It’s already bad, very bad, and has been. I think it’s about to get much worse. This is, again, just a theory, a thought that took shape; but it bears further monitoring. Look at the total effect of the foolish sanctions, smears, and games – someone is cutting someone off from the wider world.

Our wicked fake rulers are lowering a new iron curtain. Around us.

UPDATE: The Saker offers one heck of a theater-wide assessment.