Did you ever have a feeling about a college professor? Maybe a classics professor? (What is it with those, here and at TPC, lately???) Anyway, did you suspect some old man might have, say … lost the War Between the States? Probably not. But, it could have happened. Such is the premise of,

A Fatal Mercy: The Man Who Lost The Civil War 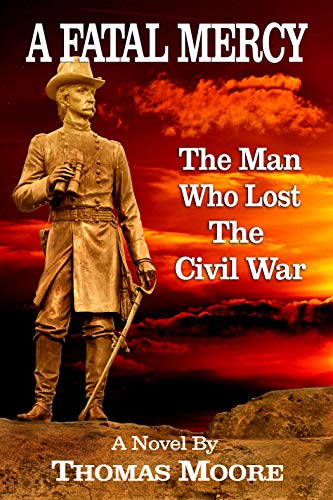 Tom Moore is a friend of mine. He is a man of the West, dedicated to more than mere Southern culture, to measured, educated civility itself. And, by “dedicated,” I mean actually willing to resolutely walk where Angels fear to tread. For that alone, I would recommend his novel. Yet, only a modest way into the 727! pages, I am already hooked, materially.

As I told Tom in an email, I really think this is the first Civil War fiction I’ve read since The Red Badge of Courage, some 35 years ago. Fatal Mercy has a Crane feeling about it, maybe something Faulkneresque. This is historical fiction with a high degree of historical accuracy, not unlike the “can’t believe it’s NOT fiction” work of Erik Larson. In other words, it’s a story you don’t want to pause. There’s also another speculation in my mind about Lieutenant Drayton and his titular (in)action. Might his mercy affect the War of Southern Independence as Bilbo’s did the War of the Ring? I have no idea at this point. But, again, this point is very early on. Join me and let’s find out what happens.

Consider this another of my famous book review previews – more to follow, here, maybe at TPC, and on Amazon (5 Stars are a given). Order your copy today – click the above link and/or picture – and get started. She’s $4.95 on Kindle and $19.95 for a trade paperback.

Saw you a-marchin’ with Robert E. Lee;
You held your head a-high, tryin’ to win the victory.
You fought for your folks but you didn’t die in vain;
Even though you lost, they speak highly of your name.