The Grand Zucker is at it again, meeting with his fellow travelers.

Facebook CEO Mark Zuckerberg has been hosting informal talks and small, off-the-record dinners with conservative journalists, commentators and at least one Republican lawmaker in recent months to talk about issues like free speech and discuss partnerships.

The dinners, which began in July, are part of Zuckerberg’s broader effort to cultivate friends on the right amid outrage by President Donald Trump and his allies over alleged “bias” against conservatives at Facebook and other major social media companies. “I’m under no illusions that he’s a conservative but I think he does care about some of our concerns,” said one person familiar with the gatherings, which multiple sources have confirmed.

Gramnasty. Shapiru. When does he plan to meet with anyone from the right?

Happy to see that Gramnesty has overcome that temporary fit of statesman-like manliness that attacked him during the Judge K show trial. He’s back to normal:

Those who participated in the 2015/2016 surveillance and spy operations, which evolved into the 2017 (through today) soft-coup effort, are relying on a defense that Russia ‘hacked’ the 2016 election. This false narrative is how the corrupt administrative state will defend themselves. Pay close attention to this interview and note how Senator Graham supports that […]

It’s good to see that Graham has completely recovered from his fit of manliness during the Kavanaugh hearing. And, it’s good to see RepubliCONS like Graham progressing. Instead of waiting, posturing, and then caving to the Dems, they’re now actively proving their uselessness.

Graham is hoping to get bipartisan support for the bill, which he said will provide grants to states that implement “red flag laws.”

Senate Judiciary Committee chair Lindsey Graham told BuzzFeed News he will start crafting legislation next week to expand police powers to preemptively seize firearms from people believed to be a danger to themselves or others.

Graham is angling to get bipartisan support for his bill, and has been in discussions with Democratic Sen. Richard Blumenthal. Neither would outline specifics Thursday beyond saying it will be an original piece of legislation. Graham said work on hammering out the contents of the bill will begin next week.

“The benefits are enormous. If you just stop one, that’s enormous. And there has to be due process, we all get that,” Graham said last week at the end of a Judiciary Committee meeting studying red flag laws.

Other Democrats were surprised that a powerful Republican like Graham would be willing to try to pass any kind of red flag law legislation.

Preemptive stupidity to surprise even the Democrats. Yay! And, no, Mr. and Mrs. Libertarian, there’s no need for any of this nor any legal authority for this (or any other gun control).

Now, if “dangerous people” applies to the police and the military, then maybe there’s something there. Of course, we all know who’s dangerous to Washington. We all know that they are dangerous to us, especially the swishy, ultra-leftwing “conservative” types.

Today, not Grahamnasty. When did he come back? That and more in today’s PNW:

Sen. Rand Paul, the only sane man left on Capitol Hill, is derisively dubbed “General*Paul” by Lindsey Grahamnesty. Lindsey was himself described recently in Taki’s Mag as “suspiciously swishy.”

Today Dr. Paul, the General (I like that, let’s take it away from them), took a hard stand against the bizarre, if predictable, new budget proposal.

Kentucky Sen. Rand Paul is preventing a two-year budget deal from passing, as the White House advised federal agencies to prepare for the government to start shutting down at midnight.

Congressional negotiators were scrambling earlier Thursday to lock in enough votes in the House, and that was before Paul, a Republican, made public his dissatisfaction with the deal, which would raise government spending, avert a government shutdown and lift the debt ceiling.

A senior administrative official said the White House is instructing agencies to begin shutdown preparations in the event that Congress fails to pass a budget before the midnight deadline.

Paul is pushing for an amendment to maintain budget caps, but Senate sources say leaders have no plan to give Paul such a concession, meaning that he can continue to prevent a vote until after midnight, when government funding runs out.

The colossal bill, which lawmakers have been negotiating for months, would be a game-changing piece of legislation, clearing the decks for Congress in dealing with major spending issues as well as doling out disaster relief money.

The overall deal also does not address the high-profile issue of immigration, a key sticking point for many Democrats; but it does increase spending caps by $300 billion for the Pentagon and domestic priorities, a crucial incentive for getting enough votes from both parties.

The Convertible of State is aimed at the edge of a cliff. The Elephant at the wheel floors the gas pedal. The Donkey passenger shouts, “Go, Man, Go!” This is the bipartisanship the people claim to be all crazy about – “gettin’ the people’s business done!” Most don’t realize they’re in the backseat behind the two dumb animals, headed for the edge at high speed.

I guess Rand is more like a traffic cop than a general. Hey, still a man in uniform, right? Maybe that’s what Grahmnesty meant by the remark; you know, what he digs…

The uniparty hasn’t been able to pass a whole and complete annual budget for about a decade. Stopgap after appropriation after special package after… Now! Now, they’ve got us a twofer in store, doubling down (up) to make up for lost responsibility. Deficits and the debt be damned.

Go ahead. Shut her down. Leave her down.

American history repeats itself: There stands Paul like a stone wall!

*Lindsey ridiculed Dr. Paul for wanting to bring our standing armies home and end the oldest war in US history. (I’ve never used the term “cuck” here, you know). Neocons like Grahamnesty should favor the idea, giving the troops a breather before the next war with Iran and/or North Korea and/or Russia and/or China and/or Whomever it is. You know, the war just after the depression and before the civil…

Senator Susan Collins (R-ME) has proposed the Terrorist Firearms Prevention Act of 2016, popularly known as the Collins Amendment. Who could possibly be against such a thing? I am, for one. Her proposal is similar to Diane Feinstein’s S.551 and several other meaningless measures floating around the septic tank of Congress. Her’s is the one in the news today having passed a procedural vote 52-46. Here’s the majority of the Amendment (click the picture for the whole thing):

The vote had to be of the unrecorded, oral variety as I can’t find reference to it. Congress frequently avoids such disclosure. Why would anyone want to readily know how his Senator voted on something anyway? There are reasons a rational man would oppose such a “common sense” law. Anyway, support for this version of gun control is being hailed as some sort of crack in the GOP/NRA wall against a safer America.

Lindsey Graham (R-SC) is a co-sponsor of the Act so we can assume he was among the 52. His explanation of its provisions highlight the problems with the Amendment and various other government projects. Per the Times story:

Republicans find it much easier to explain enacting gun restrictions to constituents devoted to the Second Amendment if they can frame their position as an act against terrorism.

“The Constitution’s a sacred document, but it is not a suicide pact,” said Senator Lindsey Graham, Republican of South Carolina and a gun owner. “This is not hard for me. Due process is important, but at the end of the day, we are at war.”

Graham clarified in a press release:

WASHINGTON – U.S. Senator Lindsey Graham (R-South Carolina) today made this statement after voting in support of the Collins amendment to prevent terrorists from buying guns.

The amendment survived a procedural vote, 52-46, and remains eligible for a final vote.

“At the end of the day this really is about counter-terrorism, not gun control. We are a nation at war against radical Islam and under increasing threats both here at home and abroad.

“President Obama’s foreign policy has been a failure and helped give rise to the very threats we face. I have long argued we must do more to counter the threat abroad. However, it is also important we take steps here at home to protect ourselves as well. It’s why I supported the Collins Amendment.

“Simply put — I don’t want anyone who is too dangerous to fly on a plane to buy a gun.

“To be on these lists today means there is reasonable suspicion and credible evidence that the individual in question is involved with or in support of terrorist activities. There are about 109,000 people on these lists and 99% of them are foreign nationals, not U.S. citizens. There are only about 2,700 Americans who could be impacted by this measure.

“This debate will continue and I will continue to work to find common ground that both protects the rights of law-abiding citizens and prevents terror suspects from purchasing guns. The differences between the competing approaches are narrowing.

“I will continue to strive to be a senator that can bring us together and find common ground in times of great threat.
####

He’s right about continuing to strive to be a senator but all wrong beyond that.

The Act isn’t about counter-terrorism or about gun control. It’s just another law and another burden on the people.

Graham is correct that Hussein Obama’s policies have only made the threat of terrorism worse. To be fair though, Hussein Obama has only continued the disaster of a policy put in place by Bush 43. And Graham’s proposals on the subject, whenever he spouts off, are always of the kind which would make things EVEN WORSE.

Neither Graham nor any other Senator really cares about Due Process. This proposal, like S.551, has a huge loophole to allow the Attorney General carte blanche authority over who goes on the list and allows the government to ultimately assert national security as an end-around to avoid due process in court. By Graham’s math that means 2,700 Americans right now could be out of luck; the list would surely grow if the Act passes into law. Don’t look for any of the foreigners to go home; in fact, more and more will just keep coming.

Graham’s position may be summed up as: “We’re at war (with an enemy we created and brought home). Therefore the Second Amendment and due process of law can go out the window.”

The saddest part of all this (as if it isn’t sad enough) is that the whole thing is pointless. Gun control does not work to stop gun violence. Period. None of the criminals and terrorists Collins and Graham feign interest in stopping would be subjected to any provisions of the Act. The University of Chicago “just discovered” that criminals don’t buy guns the legal way (surprise, surprise!). So much for soft gun control controlling crime. Even hardened European gun control does next to nothing to stop gun violence. When it comes to government gun control it’s all about the state controlling citizens and about perception (image over substance).

Then there’s the issue of bombs…

All this shows again and again you cannot trust the people who created the problem to know how to solve it. Don’t buy the gun-fly lie. 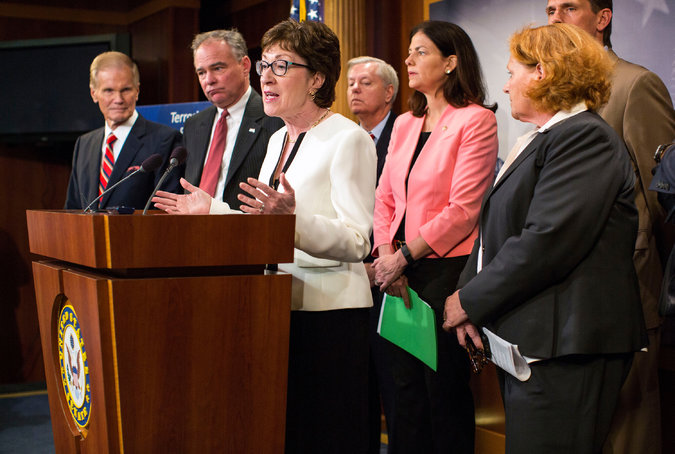