The New York Times had an interesting piece about the growth of metropolitan super-regions, which are reshaping the country and the economy. The Times sees problems:

America is reorganizing itself around regional infrastructure lines and metropolitan clusters that ignore state and even national borders. The problem is, the political system hasn’t caught up.

America faces a two-part problem. It’s no secret that the country has fallen behind on infrastructure spending. But it’s not just a matter of how much is spent on catching up, but how and where it is spent. Advanced economies in Western Europe and Asia are reorienting themselves around robust urban clusters of advanced industry. Unfortunately, American policy making remains wedded to an antiquated political structure of 50 distinct states. 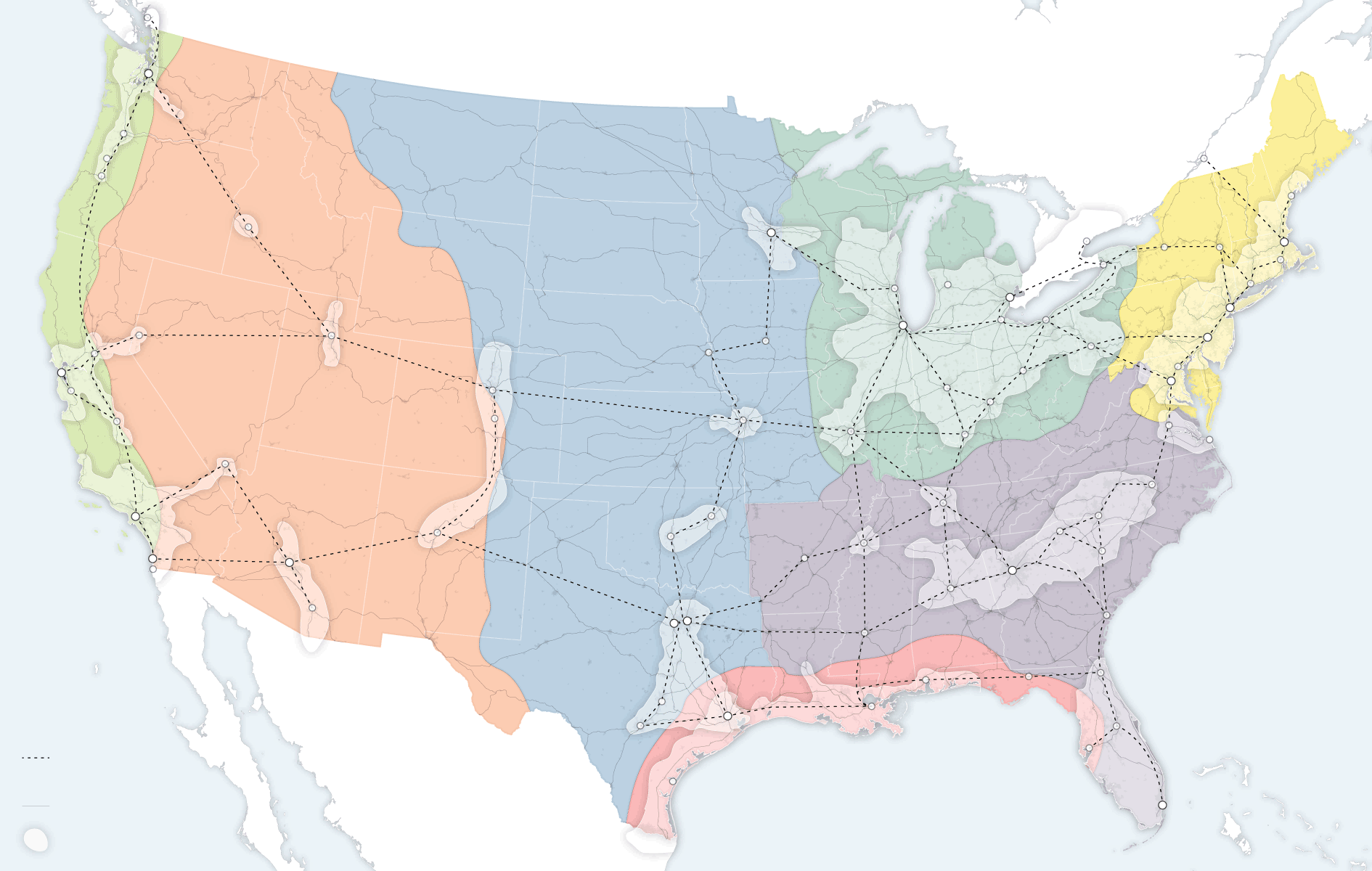 Not to worry, those “antiquated” 50 states are not going anywhere. And, of course, there’s no chance of losing the Imperial Union. What the Times envisions is another layer of government – the megalopolis or regional level. Think of it as a bureaucracy of states, cities, counties, and the feds working together on transportation issues. At least that is where it will start. In reality it will just amount to a new tax jurisdiction adding more and more rules and regulations … to make our lives just a little better.

The existing cities and states are doing a terrific job as-is. 203 out of 229 of the largest cities and metro areas in the nation have experienced a rapid decline in middle class living since the turn of the century. Here is that map:

The Gray Lady is giddy about the possibilities, particularly in curing the economic ills of rural areas. “Such [high speed rail] networks would just as easily help poor and rural areas, like Appalachia. Upgraded transportation corridors between New York, Washington and Atlanta could finally lift Appalachia’s isolated and stagnant towns stretching from New York to Alabama by facilitating investment in farms and vineyards, food processing and eco-tourism.”

People in West Virginia had better watch out tonight. American talking heads are always preaching trains. We’re only $450 Quadrillion away from Hyperlooping from Gotham to Smallville. In reality the small town locals will only experience higher taxes and a passing flock of carpetbaggers and maybe some “refugees”. Any “eco-tourism” will likely mean eco-traffic more than anything else. Ask anyone in Gatlinburg about that and the “tourons” as they call the tourist morons who clog the roads in their never-ending search for t-shirts and cheeseburgers.

Private enterprise will inevitably make good use of demographic and geographic shifts. Wonders can and will be accomplished at the local level or trans-local levels if the cities and states get out of the way. There’s no need to add any outside fees and rules. And the feds? Well, you ran off King George, put a man on the moon, turned the economy over to European banking criminals, and killed a helluva lot of folks. What more could we possible ask of you. Thank you and goodbye.

In better, brighter news, the CERN researchers have artificially accelerated nano-particles to speeds faster than the speed of light (hyperloop that!). In the near future we may have the ability to launch politician and bankster laden spacecraft away from Earth and into the nearest star. That would be worth whatever fee is involved. Let’s map that one out.