The first 5-Star review of THE SUBSTITUTE is now live at Amazon:

Thomas
5.0 out of 5 starsA GRITTY, REALISTIC LOOK INSIDE THE PUBLIC SCHOOL

It takes courage to write a book. Few things are as intimidating as sitting down in front of a blank computer screen day after day and trying to fill it with something worthwhile. Perrin Lovett is doubly brave. He has written an original, exciting, entertaining story. But he also had the courage to take on the most sacred cow in the vast American herd – the public schools. THE SUBSTITUTE gives us a vivid, realistic, inside look at the failing public schools based on real, day-to-day experience. Many non-fiction studies of public education have been appeared in the past few years. But THE SUBSTITUTE is the only novel on the subject I’m aware of that compares to the famous “muckraker novels” of the early 20th Century that exposed such social evils as child labor, worker safety, and political corruption. Writers like Upton Sinclair, Ida Tarbell, and Lincoln Steffens changed America by using fictional truth to expose the social ills they addressed. I hope that Perrin Lovett’s novel will have a similar effect on how we look at public schools, which demand an ever greater bite of tax revenue while producing an ever worse result.

Perrin Lovett is a natural story-teller, with a superb command of language and a tone, sardonic at times, that is appropriate to his subject. And he has created a splendid protagonist, Dr. Tom Ironsides, the substitute of the title. Dr. Ironsides is also Colonel Ironsides, retired from the Marine Corps and from subsequent “black ops” with the CIA. He is an academic, trained in the Classics, and a warrior, trained to function in a world where survival demands competence.

At first I was concerned how Lovett would get such an engaging character from the battlefield against terrorism to the battlefield against ignorance. But he does it quite well, quite credibly. Ironsides is one of those people with the self-confidence and the idealism to want to spend his later life setting things right. What better venue for his knowledge, skills, and natural authority than the schools? But since he’s not officially certified, he has to start out teaching as a full-time substitute. As a substitute, he covers many different grade levels and subjects, giving the reader a genuine cross-section autopsy of an unsustainable system. It’s crushed by its own bureaucracy, treats its students more like inmates of a prison, destroys love of learning, and drains the heart out of the teachers. Most of them love their kids and aspire to teach them well, but they’re over-burdened with ever more testing and data-keeping and bureaucratic procedure. Instead of making the classroom a place of excellence in learning, public schools are creating sinkholes of mediocrity.

I won’t spoil the ending except to say it’s very satisfying. It’s fictional, of course, but it ends the only way the whole national public school debacle can end if America is to remain a strong, free, prosperous, self-governing nation. Only a well-educated people can keep it that way. If we do follow the new course described in THE SUBSTITUTE, we’ll have Perrin Lovett to thank.

Wow. That feels like a heavy responsibility. For my part, I’ve started making a few minor changes to the book. First, there are always little improvements to make, my pedantic CYA in the Afterword aside. Second, the formatting needs a little work, which I can accomplish soon. (For that, I blame the computer and the template). 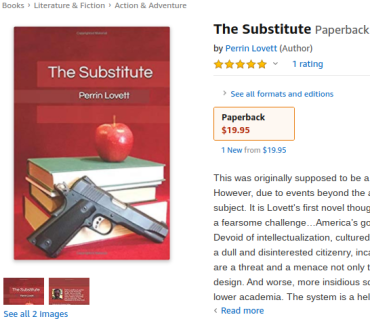